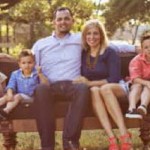 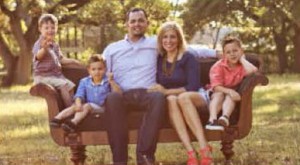 Justin and Misty McElhannon have been together for 10 years and have three sons, Bryce (9), Brody (6), and Braxton (4). They moved to Boerne in 2008 and immediately fell in love with the community. Shortly after their move Cara Hobbs invited the McElhannon’s to join their “Young Marrieds” sunday school class. It was in that place that we began to see what relevant relationships look like. It has been an honor to serve Clays for Cara the past four years and it is extremely humbling to now be included in the event.

In May of 2011 we were blindsided as Justin was diagnosed with Polymyositis, Systemic Sclerosis, Interstitial Lung Disease and several other autoimmune disorders. After two years of heavy treatment plans from multiple doctors and weeks at the Cleveland Clinic, Justin was diagnosed with Avascular Necrosis. We battle his health daily. He is 100% immunocompromised and has spent the better half of 2014 in and out of the hospital. While doctors are not able to find a cure or offer a normal life expectancy…the whole “Mac Crew” continues to put their faith in God and support from friends and family.

Justin McElhannon fought a long hard fight for his life with great courage and he never wavered in his faith that Jesus could heal him. He was welcomed by Jesus into his forever home on April 6, 2015 and healed in every way possible. Justin is survived by his wife, Misty and his three sons, Bryce, Brody, and Braxton. CFC is honored to have supported this family and is grateful for Misty’s continued support of CFC.